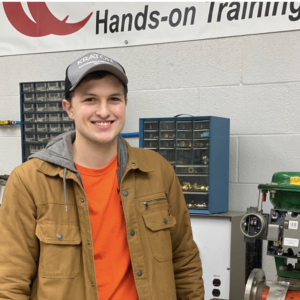 “It was just something I was taught in high school—you’ve got to go to college to get a job,” he said.

But after a year studying land and energy management at Marietta College, “college just didn’t feel right to me,” said Grosklos, a 2018 graduate of Fort Frye High School.

His parents, Michelle and Patrick Grosklos, attended the Washington County Career Center (Marietta) in high school. Michelle has worked there for nearly 20 years, but Nick wasn’t convinced it was the post-secondary path for him.

“We had discussed the Career Center a couple different times, but he wanted to do the college route,” Michelle said. “It had to be up to him.”

Although she said her son enjoyed his time at Marietta College, she could tell it wasn’t turning out the way he’d hoped. She eventually got Nick to talk with John Moore, the industrial training coordinator, about some of the programs offered by the Washington County Career Center’s Adult Technical Training arm.

Nick enrolled in the one-year industrial maintenance mechanic program and soon decided it was a great fit. “The hands-on training is really what caught my attention,” he said.

The instructors worked in the plants where they were training Nick and his fellow students to one day work.

“They’re able to see the different learning paths of each person that’s ever come through the plants,” she said. Nick was hired as an maintenance mechanic intern at KRATON Polymers in Belpre, shortly before graduating in September.

“I went in there kind of nervous,” he said. “(But) everything lined up with what I was taught.” Now he’s enjoying working with his hands on a daily basis. “If something breaks down, I go fix it,” Nick said. “You’re working with something different every day.”

Article courtesy of Evan Bevins with the Marietta Times.